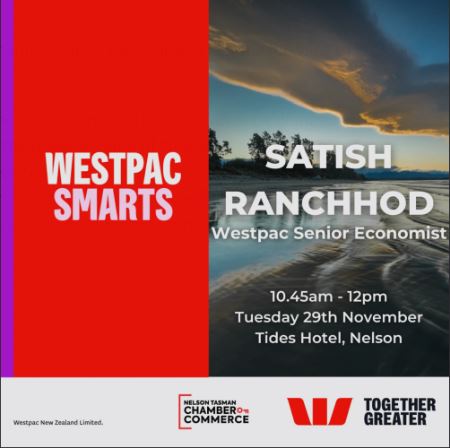 by Nelson Tasman Chamber of Commerce
35 35 people viewed this event.

The final Westpac Smarts session for 2022 will be an economic wrap of the year and looking forward to 2023 with Westpac Senior Economist, Satish Ranchhod.

Satish joined Westpac’s Economics team in 2014. His work focuses on inflation and domestic demand conditions. Prior to joining Westpac, he was an adviser at the Reserve Bank of New Zealand. Much of his career has focused on analysing and forecasting trends in the New Zealand economy, with a particular focus on inflation. Satish has also spent time as an economic researcher, leading the Reserve Bank’s analysis of the economic effects of the Canterbury earthquakes and its analysis of the global economy during the financial crisis.

To register for this event please visit the following URL: https://www.commerce.org.nz/event/westpac-smarts-satish-ranchhod-economist →

A key purpose of the Nelson Tasman Chamber of Commerce is help create the best commercial environment in which you can achieve your business goals.

Advocacy and identifying key issues that affect businesses in the region are core roles for the Chamber.  We use our strong positive voice to advocate on behalf of our members and in the interests of the region.  We make submissions to both local and central government on business related issues.

Make sure you have your say by being part of the Chamber. We will be your advocate when you need us and can assist you in overcoming obstacles.

Members are encouraged to do business with, and support, other members.  We do not supply our email database but members can have news, events or offers posted on our website or Facebook page free of charge.  Members can also pay to have material included in our e-news or can use the members directory themselves to contact other members (make sure you don’t spam!)  Hosts of Chamber functions are provided with ‘business cards’ of those who attend so they can follow up and thank people for attending.